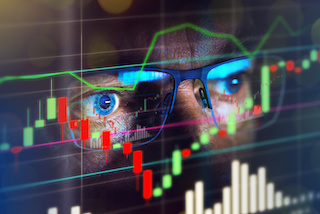 With investors focused on the recovery theme, July and August were very good months for financial markets.  So good in fact, they became so extended that stocks sold off somewhat during September. Markets should continue their upward trajectory fueled by near-zero interest rates, further economic stimulus, and operating efficiencies as companies better generate growth in this constrained environment.  Operational efficiencies and work from home will remain prevalent as most companies discover ways to operate with less overhead.  It could take years for employment levels to recover.

At quarter-end the large cap S&P 500 Index® was up 5.5% for the year while small caps (Russell 2000) are down 9%.  Even foreign markets (All Country World Index – ex US) are within 5% of breakeven for the year. China is the clear leader, up 16% with emerging markets down only 1%.  All virtually unthinkable just six months ago.  We do think small caps have some catching up to do.

Not all sectors and industries have participated in this advance.  While technology remains the clear leader year-to-date, extended valuations led us and others to reduce exposure and rotate toward industries more dependent upon an end to the pandemic.  These “value” sectors (industrials, utilities, financials, and energy) represent a less expensive way to be invested for the coming earnings and growth recovery.  While these sectors offer lower downside risk, they require the economic growth the market expects to for them to appreciate.

It is well known the market hates near-term uncertainty.  The primary concerns are the election and timing of further economic stimulus.  Election uncertainty was primarily centered around a contested election requiring the involvement of the courts.  As polling has unfolded over the past several weeks, the market sees an ugly decision process that is less likely and has advanced in response.  Also, the timing of further economic stimulus becomes more certain without a contested election.  The only question remaining is how much.  But both major uncertainties are being alleviated in the eyes of the market today.

We certainly do not pretend to know the ultimate outcome of either.  One thing we do know is that elections typically produce much more emotional upheaval than financial disruption.  It is vitally important not to let political emotions derail your investment strategy.  We have experienced multiple election cycles with similarly forecasted dire consequences.  Yet through it all, financial markets usually advance regardless of who wins. Ultimately it is corporate earnings and economic growth that determine investment performance, and both have shown their ability to adapt, whichever party is in power.

On a longer-term basis, our concerns are in economic growth, inflation, and stock valuations.  It will likely be 2022 before GDP returns to pre-virus levels and will be rather lumpy, as states and countries reopen in different ways.  This is generally what drives the disparity of market sectors.  Those able to generate revenue trade at a premium to those more dependent on full recovery.  This is also why we need both in a portfolio – one for growth albeit at higher price risk, and one for future growth with less downside risk today.

Stimulus from the CARES Act earlier this year put real money in the hands of real people – very different than the stimulus of the 2008 Financial Crisis.  It added $3.5 trillion of new debt to our existing debt while adding roughly $2 trillion to the money in circulation. Normally adding this much money into people’s pockets would spark a spending spree and prices would increase accordingly to soak up the additional demand.  What happened instead is that recipients saved it; the personal savings rate immediately skyrocketed from 7% to over 30%.  Much of it has been spent by now, by those who needed cash to get by and others who used the extra cash to spend.  Should new stimulus coincide with a vaccine or treatment allowing businesses to fully reopen, inflation should result.  The money supply will be much larger, economic growth will strengthen and those working will feel more confident to spend.

We have written before how difficult and risky it is becoming to produce income.  Inflation undermines the value of low/no-growth assets and bonds are the ultimate no-growth asset.  With interest rates at all-time lows, bonds are priced very high.  As inflation causes interest rates to rise, bonds lose value, which we are already witnessing.  That is one reason we continue custom designing structured notes to generate much higher income with a very different risk profile.  Bonds will always serve a purpose in a portfolio, but income won’t be primary for a long time.

Lastly, we’re concerned over the risks of heightened stock valuations.  The S&P 500 is currently valued at 25 times next year’s expected earnings, far above the historical average of 16 times earnings.  Extended valuations typicallylead to deep corrections.  However, we could see a rotation among the S&P 500 sectors, where the expensive technology and communications stocks fall in favor of the cheaper industrial, materials and financial names.  With the amount of stimulus in play and investors seeking a place to put cash to work, this seems a more likely outcome.

How quickly can global economic growth resume to support further price appreciation?  Valuations this high require either substantial earnings growth or investors paying ever higher prices for lackluster earnings.  As the latter is unlikely, expect modest returns for a while – especially without the tailwind of falling interest rates. When all the good news is priced in, a correction could follow without global economic recovery.

Where will future growth likely come from?  The US markets have far outpaced foreign counterparts over the past decade.  Technology is a larger part of our economy and we are still viewed as the safest place to invest.  But our markets are expensive, and our economic growth is lower than other parts of the world.  We have written about global demographics supporting higher economic growth in the emerging markets.  Their growth is and will be higher than ours going forward, and foreign markets are less expensive and have higher dividend yields.  It comes with the tradeoff of greater volatility, so having too much can be counterproductive.  We have maintained emerging markets exposure for the past few years and anticipate increasing it as the global recovery matures and domestic growth is harder to come by.

Today the market is driven by the recovery from COVID and reopening the economy.  Later will be a different story.  While it is very difficult to predict market timing, we remain diligent to our clients’ long-term objectives and risks they face in creating the life they each want.